Read at your leisure, or click below to find information fast: 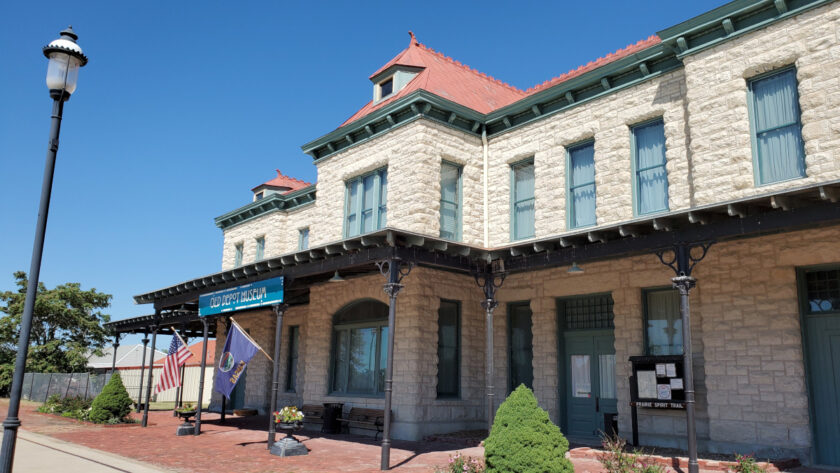 By Car: Free parking is available in the lot on the west side of the museum.

We have expanded our hours at the Old Depot Museum and the FCHS Archives & Research Center. Please note that these hours and restrictions may change or be updated as state/local mandates require throughout the COVID-19 pandemic.

Please note that museums and archives face special challenges during a pandemic because artifacts and archives cannot be sanitized without risking permanent harm to the object. Limiting exposure and allowing time for viruses and bacteria to die off naturally is an important line of defense in keeping staff, volunteers, visitors, and artifacts safe.

Tuesday through Saturday: 10 a.m. to 4 p.m.
Closed Sundays and Mondays

Admission to the Old Depot Museum is free for all visitors. We appreciate notice of groups of 20 or more to ensure we have enough staff on hand to provide the best possible experience, but notice is not required.

History of the Depot

Bringing the Railroad to Franklin County

In the mid 1800s, a Franklin County resident’s transportation options were limited to walking, riding a horse, or using a buggy or wagon. Every town hoped to attract a railroad line to make travel and shipping easier and faster. Access to the railroad greatly improved a newly formed town’s chances for economic growth and success.

Several railroads were vying to be the first to cross Kansas. Business and community leaders from Douglas, Franklin, and Anderson counties advocated heavily for the Leavenworth, Lawrence, & Galveston Railroad. In September 1867, Franklin County approved a bond to fund the LL&G—but only if the LL&G reached Ottawa by January 1, 1868.

On December 31, 1867, the “Ottawa” engine pulled one passenger car and three cars loaded with iron toward Ottawa to finish the last 1,860 feet of road into the Ottawa city limits. The iron was unloaded, laid, and spiked in front of the train. The train rolled into the city limits of Ottawa hours before the deadline.

Passengers first boarded the LL&G north of the Marais des Cygnes River at a small structure not far from here. After the railroad bridge was finished, the depot moved south of the river to the southeast corner of Walnut and Second streets. This depot was housed in an 1865 building originally intended to serve as a stable for a large hotel that was never built.

In 1878, the depot crossed the river again, moving into a new building with two waiting rooms, a ticket agent’s office, and a baggage room. This depot was located in what is now the parking lot on the west side of the museum.

The Southern Kansas and the AT&SF

In 1885, the Southern Kansas began to make plans for a grand new depot.

Plans for a bigger, better depot

The Southern Kansas Railway Company (under the ownership of the Atchison, Topeka, & Santa Fe Railroad) made plans to enlarge the machine shops and roundhouse and build a bigger, more elegant depot. Workmen began excavating the basement in October 1885, and the railroad received a shipment of sandstone from Elk County, Kansas, for the foundation.

Construction delays began almost immediately. Cement shipments were delayed. Winter set in. By March 1886, only the foundation was completed. Two months later, the freight depot was destroyed in a fire.

Construction ground to a halt for months. In November 1886, the Southern Kansas Railway Company began building a new freight depot, but no work was done on the passenger depot. Wild rumors took flight. The Garnett, Kansas, papers reported the depot was moving to Garnett. The Ottawa papers reported construction would begin again in March 1887. Ottawans were angry that the thousands of visitors coming to town for the Chautauqua Assembly were treated to a view of a giant hole in the ground when they stepped off the train.

In 1887, local architect George P. Washburn announced that he was hired to furnish plans and oversee construction of the new depot. The Atchison, Topeka & Santa Fe, parent company of the Southern Kansas, promised construction would resume in 1888, but Ottawans were skeptical.

Civil War veteran George Washburn (1846-1922) moved to Ottawa in 1879. He first found work as a carpenter on the Hamblin Block on the northeast corner of 2nd and Main streets in Ottawa. Soon, he was designing and building courthouses, churches, stores, train depots, and hundreds of residences. This depot and the courthouse are two of Washburn’s most prominent buildings in Franklin County.

“The…new depot pleases more and more as it nears completion”

Three years after the foundation was first excavated, construction resumed on the depot. Meanwhile, the AT&SF decided to built a more substantial structure out of limestone from Cowley County, Kansas, instead of brick called for in the original plans.

The local newspapers reported enthusiastically on the progress of the depot’s construction and highlighted local craftsmen working on the structure. Stonemason Sone Pierson, who supervised the stonework on many of Ottawa’s early buildings, personally selected the cornerstones. Irwin C. Brown plastered the walls. N. Nebelong completed the carpentry.

Men worked on plumbing, gas fitting, steam pipes, painting, roofing, and framing. On December 27, 1888, the Independent-Journal announced, “The new Santa Fe Depot will be finished this week, and occupied by next week at the farthest.”

In 1962, AT&SF opened a new depot at 1314 North Main, where the BNSF tracks are still in use today. The depot was in use until 1971, when Amtrak chose to discontinue passenger service to Ottawa.

Our one-room school exhibit also serves as the setting for our One-Room School Program, where students are invited to dress in pinafores and suspenders and experience a day in school–complete with academic, behavioral, and recreational expectations–just as a child would have in 1910.

Just outside the depot is a 1940s caboose, which was donated to the Franklin County Historical Society in 2012.

The depot also hosts numerous events throughout the year. Many events are free and all are open to the public. To learn about our events, visit our Upcoming Events page, follow us on Facebook or Twitter, or sign up for our monthly newsletter.

It’s easy to enjoy the museum on your own, but if you’d prefer a guided tour, please call us at (785) 242-1250 or use the Contact form to set up a reservation. Please note that because of the layout of the museum, it’s very difficult to conduct a guided tour for more than 15 people at a time.

Do I have to make advance reservations to visit the museum?

You do not need a reservation to visit the museum during normal hours. However, if you’re bringing a group of ten or more, let us know! We want to have enough staff on hand to answer your questions and ensure you have a great visit.

How long does it take to see the museum?

We’ve had people take hours, but one can get a good look at the 12 exhibit rooms in about an hour.

Is the museum ADA accessible?

All but one room is ADA accessible. An elevator provides access to the second floor, and restrooms are accessible.

How often do the temporary exhibits change?

On average, we rotate the exhibits in the temporary gallery three times a year.

Are there volunteer and internship opportunities at the museum?

Yes! We have volunteer and internship opportunities at the Old Depot Museum, the Franklin County Records & Research Center, and Dietrich Cabin. To learn more about volunteering, contact Diana Staresinic-Deane at (785) 242-1250 or director (at) olddepotmuseum.org.