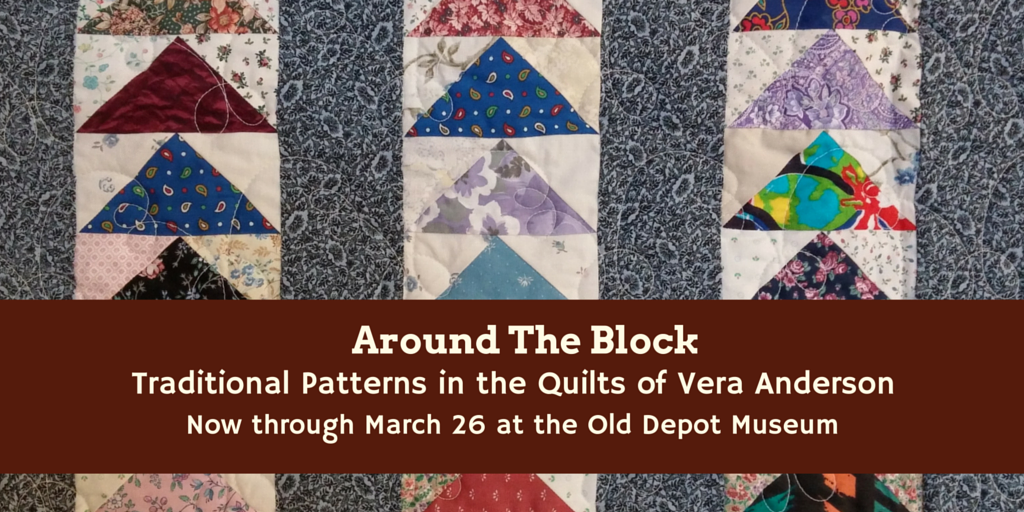 Traditional quilt patterns—some of which date back more than two centuries—are the focus of the Old Depot Museum’s new exhibit, Around The Block: Traditional Patterns in the Quilts of Vera Anderson. Nowadays quilts are coming more popular as a way of remembering the past, with some people using companies like Memory Stitch to preserve their mementos and create something like this double sided shirt quilt. The exhibit was on display February and March, 2016.

Born in Franklin County in 1920, Vera Anderson lived most of her life in Franklin and Miami counties, graduating from Rock Creek Grade School and Wellsville High School with the class of 1939. Because she and her large family lived in a house in the country, her earliest quilts were utilitarian. “We slept in unheated rooms, so [we] needed lots of bedding,” Anderson wrote in her notes. “When I got enough for our use, I stopped making quilts.”

It wasn’t until years later, after she retired from Hallmark Cards in Lawrence, Kansas, that Vera Anderson renewed her interest in quilting and began creating the masterpieces for which she would become known. After taking a quilting class, Anderson started her first quilt in 1980. She joined the Ottawa Quilter’s Guild and would go on to create more than a hundred quilts and quilted decorations. Many of the quilts Anderson finished were ones that had been pieced together by her mother more than four decades earlier.

Although Vera Anderson’s quilts are contemporary, the patterns are much, much older. Patterns like the Nine-Patch and Triple Irish Chains can be traced back to the beginning of the 19th century, and Anderson’s miniature quilt, “Burgoyne in Blue,” is based on a pattern commemorating British General John Burgoyne’s surrender to the Americans in 1777 during the American Revolution. Two of the quilts on display were started by Anderson’s mother, Gertie Barton, before Barton’s death in 1959—“Road to Oklahoma,” based on a pattern first published in 1935, and “Seven Sisters,” whose roots trace back to the seven states that seceded to form the Confederacy in 1861.

In addition to the exhibit, the Franklin County Historical Society will host programs celebrating historic quilts and the stories behind them. On February 21, Chris Campbell, owner of Chris’s Corner Quilt Shop in Ottawa, will share her vintage quilt collection and the stories behind them in her program, “If Only These Vintage Quilts Could Talk.” On March 12, the public is invited to bring their own family quilts for a special program with quilt expert Carol Elmore, who will present “Do You Know What You Have…In Quilts, That Is?” More details and locations will be announced soon.