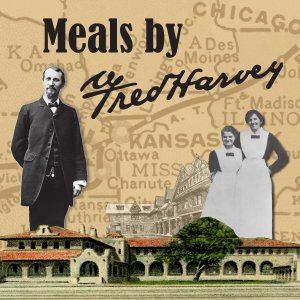 Legendary restaurateur Fred Harvey was the focus of the Old Depot Museum’s exhibit, Meals by Fred Harvey, which was on display from August 5, 2015 through November 8, 2015. The exhibit came to Ottawa from the National Archives in Kansas City.

As railroads expanded West during the mid-1800s, one of the many challenges travelers faced was reliable access to quality food and safe, clean places to sleep.

“In the early days of the railroad, depots and train stations didn’t have vending machines and lunch counters. When passengers were hungry and had a few minutes before their trains were scheduled to depart, the best they could hope for is a dining hall in easy walking distance that served good food quickly,” said Deborah Barker, director of the Franklin County Historical Society. “Unfortunately, they were rarely that lucky.”

Enter Fred Harvey. Like many immigrants, the Englishman headed west in search of prosperity. As he traveled the rails, what he discovered was an opportunity to transform the way Americans ate and slept while they traveled.

During the 1870s, the Santa Fe Railroad was too busy expanding to be concerned with customer service, forcing passengers to suffer poor dining and lodging experiences along the route. Fred Harvey saw an opportunity to provide quality, efficient, and timely hospitality services to the traveling public.

He built his restaurants on a principle of serving high-quality food by developing standards for the food preparation process and customer service, a revolutionary idea in the 19th century. As a result, train passengers could expect to enjoy an appetizing four-course meal in just 30 minutes at any Harvey House dining facility.

Most of all, Fred Harvey was committed to a level of elegance. Guests were served on china, and men were required to wear suit jackets when they ate in the dining room. To ensure travelers had the best experience possible, he staffed his restaurants with highly skilled servers who would become known as the Harvey Girls.

“Fred Harvey understood that many of the women seeking work were unchaperoned, and he felt an obligation to keep them safe. These young women lived in supervised dormitories and dressed in nun-like uniforms when they were on duty,” Barker said. “But they were paid in addition to their room, board, and tips, and they became experts at running a dining room.”

Not every Santa Fe depot had a Harvey House. Ottawa’s depot (now the Old Depot Museum), was constructed by the Southern Kansas Railroad in 1888 and purchased by the Santa Fe shortly thereafter, and a full Harvey House restaurant was never incorporated into the design. However, Harvey House operated a food cart at the depot, where passengers could buy a small meal and a cup of coffee before boarding the train.

Through words, images, artifacts, and a replica lunch counter, visitors will learn about Fred Harvey’s impact on the American hospitality industry. Children are also invited to try on replica Harvey Girl uniforms and test their hospitality skills through a game.

Several special events were held in assocation with this exhibit, including a showing of the Harvey Girls movie and a lecture by the exhibit’s original curator, Dee A. Harris of the National Archives in Kansas City, and Harvey historian Tom Taylor.